Has anybody upgraded to a wider belt?

This is the place to show off your felix printer hacks and improvements.
Post Reply
10 posts • Page 1 of 1

Has anybody upgraded to a wider belt?

My belts failed for the second time since having the printer. The first time I had a replacement, this time it took me over a week to get a belt. Nobody locally stocks the HTD 3m 6mm wide belt.
Now a lot of people stock 9mm and 15mm wide belts because they are used in CNC machines and electric scooters. The wider belts should last longer and will be easier to source, so I'd like to up-size.
I see some people converted to GT2 belt, which is easier to source, but that's not really an up-size. I've started drawing up files to make it fit, but has anybody else done it already?
Top

Who much did you print?
Top

I have bought a spare belt but did not need it so far.

I bough also other spare parts for the extruder and I had to use them already twice (I order a new one as soon as I use one, so I don't need to wait. The only thing which I did not change so far is X & Z motor, belts and fans.

Printed 58 days (I don't trust the 960km of filament which the printer shows because of my knowledge a 1.75mm 1kg roll has only ~200-300m of filament and I printed 10th of them but not thousands).
Overall the printer is 13 month old.
Top

My printer shows 1.5km of filament and 20 days of printing.

Both times the belt failed (Y axis) was after printing small parts consecutively.
I'm sure that has a lot to do with it. I would print something, peel it off and hit start again.
Now I move the location of the prints on the bed and slice again after every print.

What happens is the belt gets more used up in only one spot, the distance between the bumps on the belt changes, and round holes are no longer round due to stretching or skipping.
Here's a picture of a failed belt.

I might be over-tensioning it as well, but every time I loosen it a bit, the quality of the prints gets worse.
Is there a proper guide on tensioning somewhere?

I have never found an official Felix guide for accurate belt tensioning. Since my print applications are engineering related as opposed to art, accuracy and repeatability are important.

With this in mind I quickly replaced both standard belts with Optibelt Omega 3M belts on initial assembly. 3M belts are designed to operate with HTD pulleys, and given the high strength provided Optibelt I use standard 6mm wide belts.

Operational load calculations indicate this 6 mm belt is working well within its operational capacity with the Felix printer.

I set the tension using a smartphone and a sonic tensioning software from ContiTech.

I have run my printer at more than double the standard acceleration for over a year and have only needed to adjust tension a couple of times and accuracy has remained spot on.

If you are interested I can provide more details and guidelines.

Marc, that is some very good info!
I have some Gates PowerGrip belts on order, I'll see how they hold up and maybe look up some Optibelt backups.
I tried a belt from eBay that has steel strands inside instead of fiberglass and it was terrible.
After two hours of printing, the plastic stretched (slipped off the steel cords) and it started skipping on the motor.

I downloaded the ContiTech Tension2Go app, it's pretty cool, but I haven't done calculations for the belt yet.
What Fstat do you have yours set to? Mine wasn't registering at all on the meter at first, I tightened it up and now it shows 50N.
Top

Yes I use a similar tension settings to you of 45 N.

No doubt you are aware that timing belts natural frequency will change between manufacturers due to variance in density, materials, construction etc. Effectively the same frequency will result in slightly different tensions when comparing say Optibelt with Gates.

The Tension2Go Application from ContiTech is currently free to down load, and I have found that the frequency readings it provides are surprisingly accurate. Be aware however that the 'Fstat' belt tension readings are specifically for Continental belts.

The optimal frequency for my configuration has been calculated using Optibelt formulas in conjunction with Felix printing parameters.

I set both the X and Y axis belt tension to 45 N. I achieve this by tightening the belts to return a frequency of 115~120 Hz.

On a separate note I have found sourcing free belt lengths can be costly and limit your options. In this case I simply bought an off the shelf belt and cut it to the two lengths required, which was: Optibelt Omega 804 3M-A.

I trust this info helps.

Very helpful indeed. I've loosened my X belt a bit to 45N. It feels pretty good and tight, but not too much resistance on the motor. I will most likely keep this a 6mm belt (for now).

I did upgrade the Y belt to an HTD 3M 9mm wide though. It's the one that really failed on me multiple times. I figured, it has to move the whole bed and print, a little stronger belt couldn't hurt.
I ordered the 9mm belts and pulleys (Gates), got them, drew up the brackets, installed them and have been using them and I'm STILL waiting on the 6mm belt to come in...
I've tightened the 9mm belt to 40N, it feels plenty tight.

Here are the files for the bed holders:
http://www.thingiverse.com/thing:709097

I just made the original brackets higher: 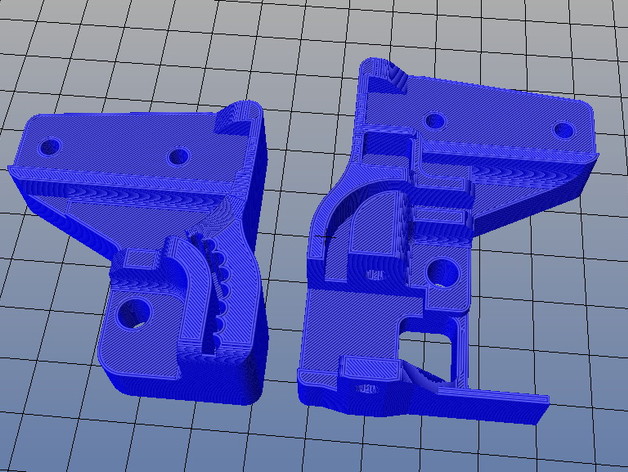 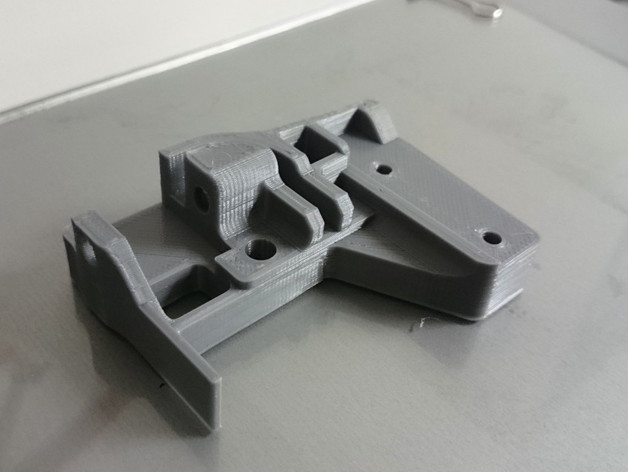 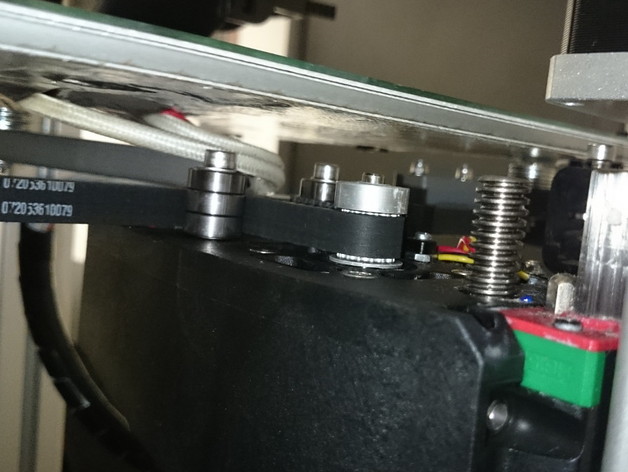 4 longer mounting screws (M3x20mm), an extra wavy washer and straight washer and two extra bearings is all it took.
Top

I would be very cautious with tightening the belt, as even 40N is probably above the load limit of the stepper motor's axle (though I can't find specs for wantonmotor, for nanotec motors its a bit less), and the actual force would be 80N if the belt has 40N tension. So you're in danger of damaging the stepper motor, or getting stepping articacts due to the deflection.

I believe the Y axis moving part weighs about 600g, so running at 10m/s^2 would require 60N of force, which coincidentally is also the maximum force the 0.4Nm steppers give with the 14 tooth HTD-3M pulley.

In practice, about half that torque goes into accelerating the stepper itself, so maybe 30N of force can be expected on the belt. This is well within the design spec of the 6mm belts of about 50N. (The actual acceleration one can get out of the whole system is probably around 2.5m/s^2, though I've been running at 1.0-1.5 these last 2 years, albeit not at full current.)

I've also found that the springy mounting of the printbed can cause a lot of vibration at certain frequencies when infilling small parts.

So long story short, the 6mm belt is well within spec for the Y axis. If it gets eaten, it's either a faulty belt, or possibly the belt scrapes on the body somewhere and gets caught, or even more likely, the pulley is bad.

Oh, the pulleys. I've just bought a replacement pulley from felixprinters.com for a side project, and the quality has unfortunately declined substantially compared to the original pulleys on the printer from 3 years ago. The new pulley has small aluminium chips embedded in it that could no doubt slice up the belt if not removed: The biggest chips I already removed, they were about twice the size, the ones marked in the photo should be about 0.6mm large, but still I'll have to remove those before I can use the pulley. The part with the teeth is obviously cut from extruded bar stock, without any of the swarf removed before the guides are pressed onto it. The extrusion marks on the teeth are clearly visible, the surface finish is also quite terrible. The old generation pulleys from SDP/SI, I believe, had no swarf and a satin surface finish, and seemed to have machined teeth rather than extruded. So, if your belt breaks on a new-ish printer, I have a suspicion what's causing it.
Top

I fully agree with concerns around belt/shaft tension, although I also believe setting the belt tension using frequency is the most accurate, hence I shared the concept.

To avoid any confusion regarding belt tension I would add that my primary focus when setting the belt tensions it is based solely on the frequency when using Tension2Go application, and I ignore the Fstat value altogether since the value is specific for Continental belts only.

The optimal frequency for a belt is specific to each brand/design in conjunction with operational requirements, and this value should ideally be calculated.

With regards to pulleys I agree they play a critical role, although I had an issue with concentric accuracy. I ended up machining my own pulleys in the end since the original units and subsequent replacements all had total indicator run-out ranging from 0.12 through to 0.2 mm. Surface quality was affected in some prints and you could hear the belt tension changing during travels. Pulleys are now operating with TIR of 0.03 mm or better.

Return to “Hacks and printer upgrades”