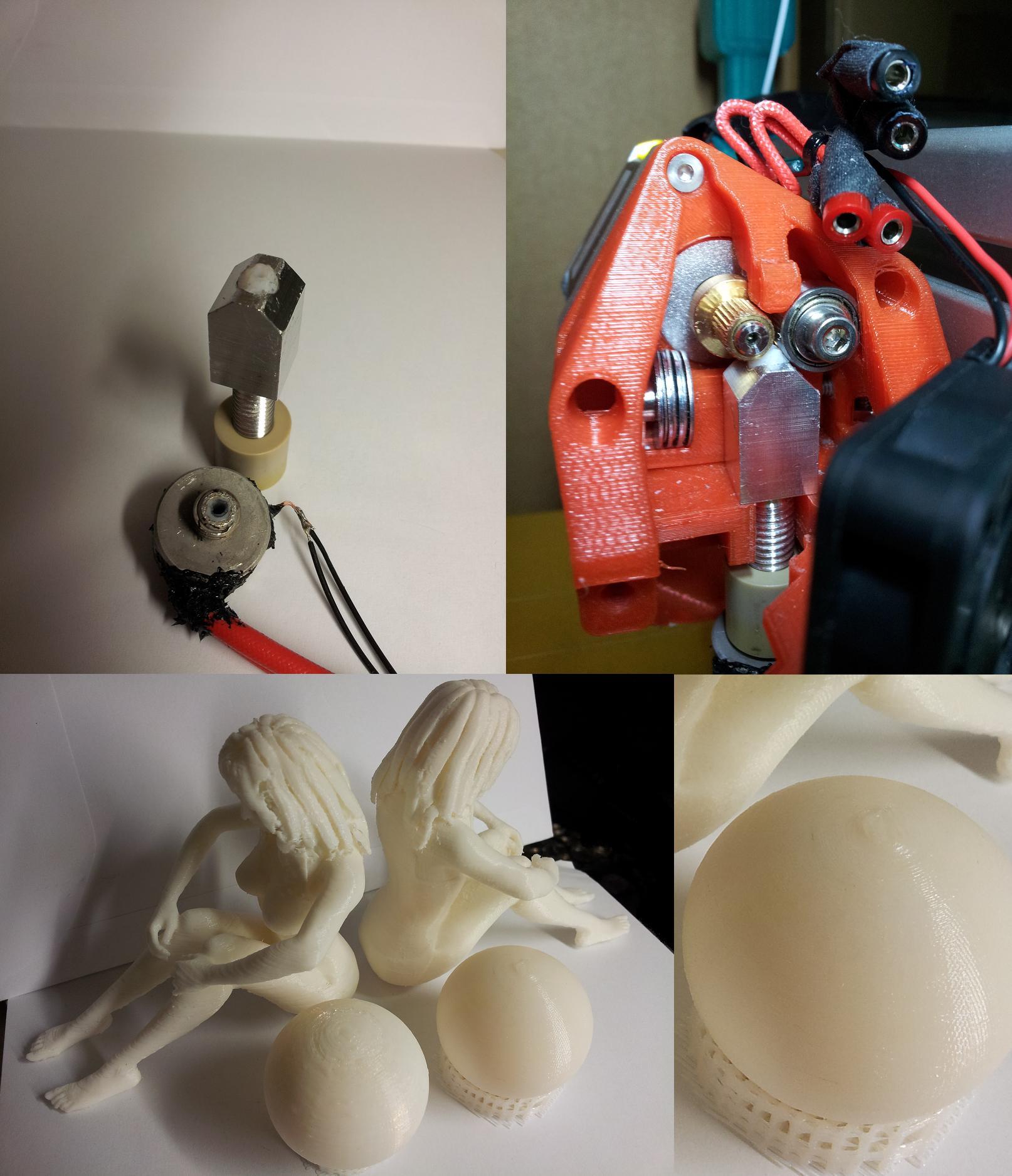 Had only a small success with my Extruder modification and that is the modification I did on the top of the cold end.

After I always had to remove the Extruder from the frame when the Extruder Jammed because Arnitel is flexible and the filament bend/foldet inbetween the wheel and the cold-end entry I spend some of the Teflon (PTFE) I bought for the hot end modification to create a new cold end entry that is supporting the filament as far up to the wheel as possible.

Asmall modification but with enourmous impact when it comes to Arnitel Extruder jamming.
The filament does not bend or fold anymore. Instead the stepper motor gives up.
Recovering from that jam is very simple. Just retracting the filament till its fully out cut of the part that was in the extruder and put it in again. Then it will work for a few seconds again till the next jam.

With the hot-end modification self I had no success. Although I printed the right figure in highquality with normal white PLA without any trouble with the modified hot-end it fails with Arnitel as bad as the non modified extruder.

I tried several modification -> different material inside the hot end to guide the filament down to the extrution point.
Non behaved any better than the standard hot end. All jamed.

I have one last idea -> Setting the whole thing under air-presure to hopefully prevent the material to climb getting old and cloag inside the hot end. But I don't have so much hope anymore to get the thing working with arnitel.

A pitty I so had liked to print that figure in high quality arnitel. If you see the surface of that high quality sphere/ball (the right one and the zoomed) I guess you know why. The best surface I have ever seen/printed.

Next to a great surface Arnitel has the big big advantage to not smell that bad as the normal PLA. That's not just a minor point for me.
I hate to enter the printer room when I print that smelly normal PLA stuff.

the figures are slightly overworked but not so much. basicly only removed supports and bumps.
the spheres/balls are fresh from the printer.

No the retracting is not the problem. The problem stays the same with 0 retracting. I already tried it.

Actually I don't even have to print anymore to trigger the problem. And its the same with the standard extruder and the modified.

All I do is using the feeding button in the manual control. If you have it feeding enough long you will notice that the extruding goes stronger and stronger till the jamming. Very reproducible. As faster you feed as faster this is happening. Maybe if you print very very slow there is a chance.

Only thing I dont get is how could I print the spheres that troublefree before.

I didn't try the 12V. I don't really see how it can help in the hot end jamming.

As I understand it through the preasure the material becomes pushed up and fills all the hot end and it's stuck there for longer becomes brown and that leeds to the jamming. I might be wrong that this is the cause of the jamming. But without retraction I don't see what else can cause a jamming.

Does anyone else have experience with Arnitel and can tell a little about his/her experience?

I found one main cause of all the problems I had with arnitel jamming and it's not in the hot end.

Wondering why I so simple can recover from the jamming by just pulling the filament out cutting off the whole part that was in the extruder and reinserting it I finaly took that cutted off part in my hand and tried to insert it in one of my spare extruders.

You need heavy force to even push it through the cold end!

I was aware that the wheel deforms the filament and it was easy visible but I wasn't aware that this is such a problem. But infact the re-forming that has to take part when pushing it requires a very strong force.

So when the extrution requires more force or the pulling of the filament from the sool by tightening the bolt you increase the problem and you have to even tighten it stronger because the additional force now needed because of the filament deforming - reforming.

Of course I tightened my bolt stronger and stronger as more jammig I had...

It seems it's better to accept some filament slippage on high extruding speeds instead makeing sure the filament will be pushed in.

I now tightened it only so much that the counter bearing-wheel just starts to turn.

So far this seems to work.
Top

Changing the hot-end fan from 5V to 12V makes a big difference, as the much better additional cooling means the filament can no longer melt in the "cold" part.

On another note, maybe for the Arnitel a grooved bearing and grooved hobbed bolt would do better without deforming the filament.
Top

Honsetly I don't get the idea that the 12V Fan should make any difference. The upper part (the cold end) is estimated around 60 to 70 degree. Not measured but I hold my finger on it. It becomes a bit hoter over time but still I could put my finger on it without haveing to retract it.

I tried it out today not by changeing the voltage but by putting much stronger additional Fan on top of that fan directly blowing that end. It didnt made a change. But then my problem never was the cold end but the deforming of the filament through the pushing wheel.

I never saw any plastic in my cold.

However if more cooling is required I suggest adapting that aluminium part and make it's surface larger instead increasing the noise by rising the fan voltage. Some holes or slices could do it already.

For Arnitel I agree that another wheel design would bring advantages and additional the more filament supporting top of the cold end but that's really just for weak fillaments like the flexible Arnitel then.

For the normal filament it's all perfect.

The good thing is it extrudes well since hours now.

The bad thing: I hit the next Arnitel specific problem by trying to print my figure.
It seems that Arnitel shrink a bit enough that the parts starts to peel itself off the table to a big degree.

I used raft and the extruder to bed gap is fine adjusted very very close. And I use 60 deg. It should be all perfect. But ..it doesnt hold.

I am unexperienced with shrinking parts problems.

I wonder if I replace the raft with a 1mm plate that I print directly under the figure and on the table with no raft will help here.

Hm. I think I give it up with Arnitel.

After 10 hours it ripped the figure completly off the table. (not unexpected the warp was extrem)

I tried to remove the supports from the remains and discovered that this undertaking is extremly difficult with a complexer part.

Also I see that due to it's better flow/fill/smoothing tendence it indeed creates excellent surfaces but it also smoothes the finer details like the swim suit borders the fingers and the toes of my figure and makes them looking a bit less great/detailed compared to the normal PLA in high quality.

So I think Arnitel is good for simpler/less detailed parts where you want to have the best surface but is the wrong choose for complexer figures with lot of small details.
Top

So the main reason to work with Arnitel instead of PLA is the smooth finish? And not the rubbery properties? I spray paint my PLA objects with spray filler and sand it (repeat this a couple times) to give it a smooth finish. Another very interesting solution I've seen lately is to print in ABS and heat vapor it with acetone. You put the printed ABS object in a closed container with vent-holes on the top. Lift the object a couple of CM above the bottom and put a view drops of acetone on the bottom. Now heat this up with the hot bed. Be carful with open fire, the acetone vapor is extremely flammable. After 15 - 30 minutes the object is glossy smooth.
Movie: https://www.youtube.com/watch?v=7854iZT6PLs

But, you need to print with ABS which gives you a new set of problems hahaha. You need to print at a higher temperature with the risk of burning out the thermistor. And need to find a good ABS adhesive hotplate solution.

Yeah, where all a bit of pioneers now. You might want to wait an extra 10 years, then everybody has those Star-trek replicators

The thermistor is NOT going to be damaged by the "relative" lower temp needed by ABS (~240), the thermistor works all the way up to ~350 (being 300 the typical "safe" top end)

About the part not sticking to the bed, well the only solution: MOUSE EARS!!!!!

It worked wonders to avoid prints to lift, and on bigger parts, you can simply pause for just a sec and put tape fixing the ears even more.
Forget about rafts, higher temps hot bed (although I use 80C most of the time on the stock hot bed) , or carving large surfaces to reduce differential plastic shrinkage
Last edited by Lioric on Mon Apr 29, 2013 4:09 pm, edited 1 time in total.
Top